I know relic is really busy and new races will come in time. They should of course focus on pressing matters.
I just wanted to throw in my idea for Chaos faction mechanics that would set them apart from Space Marines and make them really fun and unique to play

I really would like to see Chaos Space Marines with demonic attachment and freedom to choose what God they want to go with (doctrines). May seem very hard to implement something to please everybody. But with a few cuts here and there im sure they can make it work. Here is how i would do it.

Structures list
Desecrated Fortress as stronghold would produce your Cultist squad and builders and works just like a SM HQ.
Chaos Chapel would produce CSMs Havok and Raptors.
Demon Pit would produce Demonettes, Nurglings, Blood Letters, and Tzeenth horrors. (SOMETHING for EVERYBODY) Some of these units will however be locked behind T2
Dark Mechanicus Machine cult would produce vehicles or demon engines (of lesser kind).
Chaos Armory
Chaos Shrines

Now to the Faction specific mechanics 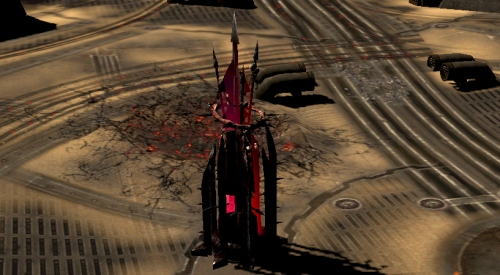 Chaos Players can choose if they want to summon demons directily from the demon pits at a Higher Cost (these demons wont dissappear they are permanent until killed)
OR to sacrifice cultists to summon demons (those mentioned above) at a reduced cost (These demons are slightly stronger but dissappear back to the warp after a certain amount of time and would get a dark aura to identify them as such) This would give Cultists decent scaling and functionality for later games instead of just being meat shields.

Chaos Shrine (Function similiar to DoW 2 shrines however would also influence where you can sacrifice Cultists for demons for reduced cost.) Chaos shrines would also be upgradable with specific God Mark Doctrines (also would change the appearance of the affected shrine to help people identify what buffs are being applied) but if no god picked will always be a Mark of the Undivided. (Mark of the Undevided would just give very small buffs to your army Where God Specific marks would give specific and good buffs to your armies that are close) In a way the DoW 3 Chaos shrine would be a Waargh banner and webway hybrid.

What do you guys think?